My interest in the Georgetown Branch is twofold; to enjoy the research and history of the line and to also satisfy my modeling needs. The goal I have is to provide enough material so that I might make as accurate a representation as possible. So far I’ve gathered enough materials to give it a good go, but I have a long way to go, mainly needing to find time to work on the various modeling projects. Progress has been slow and steady over the last few years but a lot of it has been a learning experience. For example, building the open-frame benchwork and laying spline roadbed were both completely new to me. It has been fun, and isn’t that what model railroading is all about?

Note – most of my recent and ongoing progress updates for the layout will be found right here on this blog. Visit the main page and read on.

It is an HO scale around-the-room double deck shelf style layout. Single track mainline with one small staging area. Focus points of the layout include Georgetown Junction (where the

Branch met the Metropolitan Branch), Chevy Chase, Bethesda and the Georgetown waterfront where the most complex switching will be found. I’m using code 83 track with Homabed roadbed and splines and plywood subroadbed. There is a 19.5″ radius / 2.9% grade helix which connects the two levels. On the mainline, curves are no sharper than 22″ radius. Will be wired using Digitrax DCC with no signals. Switches will be thrown with a combination of solenoid machines, hand throws and manual pulley mechanisms.

The era is the mid 1940s – early 1950s. I will operate mainly small steam switchers and freight engines as well as first generation and early diesel engines. Train car lengths will be no more than 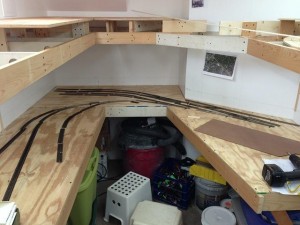 10-12 cars. The GB will operate with up to three trains; The Met local to do switching at the Junction, the Georgetown Local to switch the branch, and the Georgetown Switcher, a dedicated unit which lives down on the waterfront. Industries served include lumber, metals, fuel (coal, oil), auto parts, aggregates, machinery, paper, flour, coffee, foodstuffs, livestock and of course general freight. The Branch saw no real passenger traffic but there may be an excursion train or two from time to time.

The setting will be late summer/early autumn. The GB has a very varied landscape for such a short branch, which is one of the reasons I’m so attracted to it. Some of the highlights include a large interchange, an 85′ wooden trestle across a stream, urban 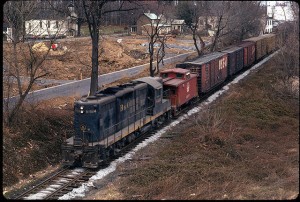 industries, a long tunnel, tracks over a trolley line, a 3-span bridge across the C&O Canal, running alongside the Canal, and waterfront industries along the Potomac river. The GB was never a “shiny” railroad line.

It was very utilitarian even though it passed right through (literally) some of the wealthiest suburbs of DC. Colors will be toned down, well-weathered and as accurate as I can be. I hope to focus my modeling efforts in a few areas to recreate some of the key scenes and structures along the line.

Photos of my progress can be viewed in the Gallery.

One thought on “The Model Railroad”

This site uses Akismet to reduce spam. Learn how your comment data is processed.