While perusing my daily eBay alerts I have set up for items that come across the auction block, I came across one I had never seen or even heard of before. Apparently on May 16, 1947 there was a fatal accident on the Georgetown Branch somewhere in Bethesda in which a train struck a private passenger bus, killing three persons and injuring five. The bus appears in the photo on its side, along the tracks, wrapped in chains and surrounded by emergency personnel. The caption reads that the photo shows one of the victims being removed; you can see them wrapped in white, on a stretcher, being carried off in the center of the image. A nonetheless, a tragic and fascinating reminder that even though the Branch had relatively little traffic in its later years, earlier on it was much busier, the track in better condition, and trains no doubt were moving faster. I have read about a few other occasions where people and vehicles were struck along the line. 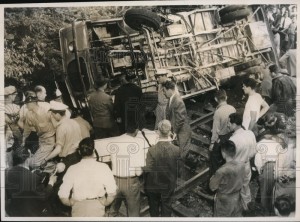 The location has me stumped. I’m fairly certain it’s not in downtown Bethesda. It appears to be a single track so may have been over by River Rd. or Kenwood (Dorset Rd.).  Perhaps some of the roads just north of Bethesda crossed at grade. I would have to dig around some old aerials and maps to see. Would love your input or any feedback on this! (*photos from eBay) 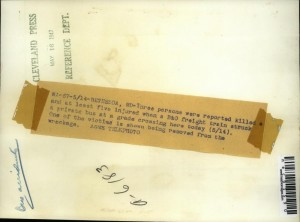 EDIT: UPDATE
Well, that didn’t take long. I posted a link to this blog post on the wonderful Bethesda Chevy Chase Back In The Day Facebook group and within minutes the mystery was solved.  Seems the bus was owned by the Congressional Country Club and was crossing Dorset Avenue when a train struck the bus. Passengers were employees from the CC being taken to the local trolley trolley terminal at Tenley Circle. I would wager that the train was traveling as it normally did, caboose-first, when it struck the bus. First up, it would have been relatively quiet as the business end of the train (the engine/loco) was far away, pushing the train. Second, I don’t know for sure but I believe they would not have blown the whistle or flagged the small Dorset Ave. crossing. Partially because the crossing would have been very minor back then and the neighbors probably wouldn’t have liked it too much. HUGE thanks to Jerry P. for making the pull and finding the following Washington Star sources! Jerry notes that the casualties were caused not as much by the impact, but rather the people attempting to escape from the bus as it was pushed down the tracks by the freight train.

This site uses Akismet to reduce spam. Learn how your comment data is processed.